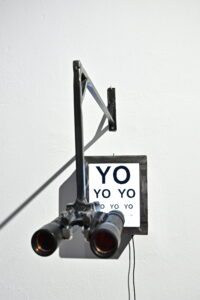 Furst_Ori (a collective formed by the artists Sergei Furst and Francesca Ori) thematically weave their work around the imprint and evolution that technological advances have been exerting on human behaviour.

Their exhibitions, fusing many techniques and mediums together: sculpture, video, (video within sculptures) lightboxes, three dimensional collages, evoke the heteroclite impressions formed from a large cabinet of curiosities, a Wunderkammer, or perhaps the vanquished remains of the enlightenment turned into a visual display. Their installations and work create a journey in and around small visual theatres and narratives. Perhaps, for this reason, their most emblematic project to date has been the Art’s Council and Elephant Trust funded exhibition, Signs of Id, on an old light boat, LV21, moored on the Thames where the public followed the work of Furst_Ori right into the bowels of the ship. The end point of the journey were videos projected into two air compression chambers – connected to the boat´s enormous fog horn – that the spectator had to insert their head into, and could only be viewed by one person at a time.

Their work together has increasingly tended towards the conceptual and narrative, but always with a firm foundation in the plastic arts and graphics; Francesca Ori studied fine art at the “Accademia di Belle Arti” in Catania, Sicily, Italy, and Sergei Furst as a cartoonist for British newspapers such as the Financial Times and Times of London – although his academic grounding was in philosophy at Bristol University. Their evolution into a collective, or duo, was a gradual process that began when they shared a studio in a sugar factory on the outskirts of Granada in Spain, a place they have recently returned to after a long hiatus in England. The mixed salad of languages they operate in, English, Spanish, Italian and Sicilian dialect and the constant exposure to one another’s work and working methods has led to their own artistic vocabulary; an idiolect of methods, materials, aesthetic and themes such us contrived dictionaries, manifestos and heads in goldfish bowls. As Furst_Ori they have exhibited internationally in England, Italy, Germany (Berlin), and Spain.

Design: In recent years Furst_Ori have divided their work into two main branches. The exhibition based contemporary art described above and an offshoot into affordable decorative wall art and sculpture. For the latter, they are the design team responsible for the online shop artandshadow.com – a reference page for their design work can be found on this site here. For those interested in acquiring their artwork as Furst_Ori there is also a page here on this site which lists some of the works currently available and links to the online sale platform. For any works not listed, inquiries can be made through the contact page on this site or by emailing directly to furstandori@gmail.com

This Site: is not intended as a comprehensive assay of their work, rather it aims to give some idea as to the flavor and direction it is taking. The gallery is a small select sample to give a brief visual survey. Individual works will be dealt with in more detail in the periodic blog.